I’m constantly trying to find curious things. Today I did not even have to leave my house to find this curious picture of a business name of which my friend Melvin shared on facebook.

Soba Totto is located in New York City on 43st between 2nd and 3rd avenue. I would think that since the restaurant is in one of the biggest melting pots in the world they would have least verified what it means in spanish.

A few months ago I remember some buzz going around here in Puerto Rico on  Jumo.com which here locally means someone is drunk. There are so many ad and company names that mean something else in other languages and cultures.

Can you name a few?

Does anyone know what it means?

One of my biggest concerns these days as a New Dad is keeping the same type of commitment with my new daughter Daniela that I normally give my clients and their efforts. Thinking about my commitment it occurred to me that maybe more business owners should align both value systems.

Yes I know there are exceptions but I am talking more about those norms and rules that  should be the same on both sides.

Most parents thrive to raise responsible children. But how many business owners are committed to having a responsible team. Different to our children and family members which we don’t get a chance of evaluating them before creating a relationship, we do get a chance in choosing people who will join our team. I sincerely think that you need to identify those responsibility traits in the recruiting process of your candidates. After identifying the right candidates who seem responsible you need to create an atmosphere that inspires responsibility.

The same manners and morals you apply in your family should be applied in your business efforts. From table etiquette to phone manners their should be no difference in the way you act towards your clients, team members, and other stakeholders. Think of how you would improve your relationships taking this approach. What manners should be the same in all relationships? Do you think any should be different?

Many family problems are aligned to money issues. The same applies in business if you are only focused on making money from your clients or resources you will end up having issues. Focus on nourishing your relationships and being loyal to your efforts and the money will follow.

When your family members run into an issue your nature is to be there for them. If you do the same with your clients, stakeholders, and team members you will create closer relationships. Always support does individuals that need help and encourage positive behavior.

If you are successful at finding a balance or equality in values in your personal life and business life you will create great experiences. Just as you would create family traditions you might be able to repeat successful projects and maintain long term business relationships.

Can you identify more qualities where it is key to maintain the same values with Family as with business acquaintances?

In Puerto Rico we have Cuca Gomez a (Optimistic Comestician) which is a character created by a locally well known comedian Otilio Warrington (better known as Bizcocho).

Cuca Gomez had a very well known phrase in spanish which was the following:

YO LO FABRICO, YO LO USO Y YO LO RECOMIENDO

This phrase when translated (from spanish) means that She creates it, she uses it, and she also recommends it. She was consistently trying to promote imaginary products in many occasions making fun of some of the old school marketing gimmicks that where used throughout TV for real products.

After having a conversation with a good friend of mine I came to the conclusion that if Cuca Gomez’s had a blog or a twitter account her approach would get her a good following:

I Use It (Yo Lo Uso). I see many people promoting videos, blogs, and other content which they might not even use. In Cuca’s words what she creates she puts to use. Before you  create and/or share something make sure it aligns with your values and to the expectations of your community. If it’s a tool please make sure it works I have seen how many sales people try to promote a product which they have not even used. The worst thing you want is not meeting the expectations of the people you attracted as most of them will not let you know what you did wrong.

Recommending (Yo Lo Recomiendo). Instead of promoting and broadcasting your message without communicating both ways try to recommend. However for a recommendation to be effective you need to have some sort of influence and reputation. So if you feel you don’t have enough influence and reputation work on it. When you recommend make sure you give enough space for the person to make a decision. What really makes a recommendation have some weight is when you can demonstrate that you created something, have a good understanding, and are using it to its capabilities.

What other benefits can you see in creating, using, and recommending?

Have you had the opportunity to identify any service, product, or people who follow these 3 steps and are effective?

Please feel free to share your thoughts in the comments area.

I have been a Fan of Santa Claus since I was a kid. Each time I see an image of Santa, it brings memories of my childhood. I hope that magic will return once Daniela comes into our World in the next few days.

I spend a got amount of time on twitter & other social media platforms and I was able to find a @santaclaus account on Twitter to have very few followers and not linked to the Real Santa.

Being a Twitter Fan I saw a huge disconnection since in Real Life Santa Claus has built a huge following for centuries. Not many of us have the advantage of being a legend without loosing influence.  Good old St. Nick has kept his influence over history.
Thinking of Christmas, Santa Claus, and Social Media made me I started think of 7 reasons why Santa Claus might not be as active on Social Media platforms.

Santa has a following that even @ricky_martin would fall short of (I invite you to Learn a Few Lessons on how to use Social Media from @ricky_martin). Having build community for such a long time and keeping so many people engaged social media might really not add to value to his effort.

Only St. Nick has the ability to be at multiple locations. During the Holiday season Santa is at the mall, parades, department stores, or even the near the corner of the street. For most of us trying to contact multiple people at the same time can be difficult since we can only be at one place at a time. So if you are not Santa Claus it might be a good idea if you use Twitter, Linkedin, Facebook, a blog, or any other channel to get your message across. Most people when they make their letters to Santa use more than 140 characters. This causes Santa to have less time for social media platforms and it makes it ineffective for him to communicate via twitter.

Santa Claus is known by various names such as but not limited too Saint Nicholas, Father Christmas, Kris Kringle, San Nicolas, and my favorite like the pronounce it here in Puerto Rico Santa Cló. It would be difficult for him to settle on one user name per platform and handling multiple account would only take more time away  from his preparation for Christmas.

Throughout history St. Nick has been given multiple image makeovers. It is recommended to keep an Avatar that is the same in across all platforms. Not only does St. Nick have previous images, which differentiate themselves from each other, I have seen multiple variations of St. Nick at the mall, pictures, parades, and other areas where his image is shared. I think having just one image to identify him would make him lose his magic (and might put in jeopardy his ability to be omnipresent).

Santa keeps his followers and community close by showering them with gifts and never asking for anything in return (other than asking you to behave which should be done anyway).  Given his long-standing reputation he can still grow his community without using social media. If you feel like working on giving please click here & donate to one of my favorite charities @serpuertorico.

Can you think of anyone that is expected to visit once a year and is more influential? When we where kids I remember how when it got close to Christmas they would manipulate and control us by only mentioning Santa Claus. I have a good friend who resembles Santa Claus very much and during the Holiday Season he would wear a Santa Hat and have candy canes in his pocket. You cannot imagine how when kids where acting up at a restaurant with only their parents would point our way and by John ( I mean Santa) looking at them it would quickly fix their behavior.

Me and My Good Friend John Duncan’s Santas Helper (December 2006)
I hope this post helps you evaluate and identify if you have any of Santa’s attributes or resources. If you don’t then you really need to start using social media platforms to get your message across.

I might have missed other reasons if you think of one get into the spirit of sharing and feel free to share any other reasons why you think Santa might not be active in Social Media?

There is a chance for you to have something in common with Santa: you can share the spirit of giving. You can donate to your favorite charity or one of my favorite charities like @serpuertorico, which is running a great online fund raising campaign.

Feel free to click the next image and find more information on the campaign.

PS. A special thanks to @robertbravery who wrote a great post on the 10 Blog post ideas for this December, Christmas Season and inspired me to write this one. Reading the blog of one of my favorite tweeps @karimacatherine I bumped into a good analogy on project management and business types. 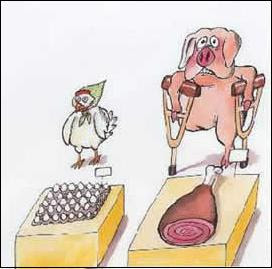 She related Chickens with Pigs and makes an explanation on how both types are described and the individual characteristics of each. I was able to identify with both although I am working more toward being the second.

It has been approximately two years since I started my own business CIMA IT Solutions , since then the equity I have gained has been mostly on the knowledge side no the economical side. I have to be very grateful that 2010 started out great and headed towards right direction.

A few weeks ago I realized that the way I was managing my small business was more on the Pig’s side than the Chicken’s side (please read @karimacatherine’s blog post to understand the analogy).

Although I see it very difficult to be a chicken being a small business owner I think that is the objective of most of us becoming a chicken. Making sure that everything is working correctly by adequately mitigating risk and reaping results and not being exposed to disaster.

What are your opinions and your approach on @karimacatherine blog post?