My experience at Misfit Con like every other event I go for a second time was a bit different and from a very different perspective. Last year when I left for the first Misfit Con I faced the most challenging year since I started my own business. Some personal things happened on the day I… My experience at Misfit Con like every other event I go for a second time was a bit different and from a very different perspective.

Last year when I left for the first Misfit Con I faced the most challenging year since I started my own business. Some personal things happened on the day I was leaving for the conference (one of our client’s was assassinated) to many other personal obstacles.

This year I went with renewed energy to see friends that I have known for a while and others that I had met a year ago and had not seen since the last conference.

With the exception of Nelson Dewitt who I met up with in Boston and AJ, Melissa, Genevieve, Cheeze, and Mirko who I saw for a few moments during SXSW while they were launching Twitgift to the public, I had missed many of my misfit friends.

This year I took the family and we drove from Chicago to Fargo after flying into Chicago for a few days to visit our family friend, Rahul.

The fact that I had Daniela and Lucy with me driving through the Midwest to arrive in Fargo, made the whole trip worth it because I did not have to worry about them being too far from me in case they needed me in an emergency situation. I also had the chance to meet my good friend Joe Sorge and enjoy some of the AJ Bombers Vegan Cuisine. 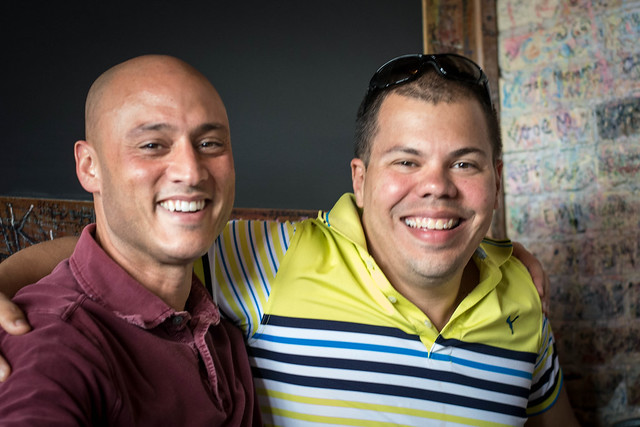 I arrived in Fargo and first thing I did was walk over to the Atomic Cafe where I ran into Nelson Dewitt, Sue Anne, and a few other misfits.

I also had the opportunity to meet Marc and Valerie and their beautiful boy Charlie (who became Daniela’s new friend). 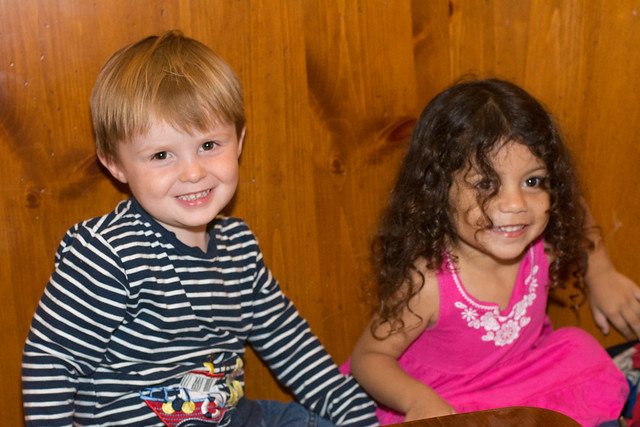 The previous year, I remember walking around and not knowing where to walk or what to do. The weather was not as pleasant as this year and I barely knew anyone at the conference.

This year was similar to arriving at a family reunion where you get the chance to interact and catch up with friends.

We headed for a late lunch at Rhombus Guys and Lucy was so impressed by the friendliness of everyone in Fargo.

The Kick Off Event

I was getting ready for the Evening event when I made sure I ran into Berni Xiong, who I finally got to hug in person for the first time. We walked over to the first Official Misfit Con event which was held in a large gallery which I can’t recall the name. This was different from the smaller venue at the Hotel Donaldson the year before showing how such a small event grew in just one year. As we walked over to the venue, we kept on adding folks to the group, many friends who I was glad to see.

The venue was spacious and filled with dear friends that kept me smiling. I watched everyone hug, chat, and talk about what they were expecting and what had happened in the year gone by.

1st day of the Conference The first day of the conference was started with a local Mexican Food Truck serving us breakfast; they made me delicious vegan tacos. I was getting ready to take Daniela over to the park while Lucy prepared to absorb the first half day of Misfit Con.

I had an awesome time just observing Daniela play at a playground while Lucy enjoyed the first bit of the conference.

I met up with everyone during lunch where we were given a healthier (and delicious) version of Cuban Sandwiches (mine made vegan of course) and headed over to watch a screening of Eric Proulx’s movie, Lemonade Detroit, and a few others. I had to leave for a moment and only saw Erik’s screening. Erik had done a great job with the video he sent the year before because he could not make it to Fargo. When I first met him, I felt like I had known him from before. I guess the fact that he influenced the name of my company, Limonade with his movie Lemonade, might have been the reason I felt that way.

When Erik was on stage he spoke about how impressed he was at the great job Melissa and AJ had done at creating the Misfit Conference; he even mentioned that an individual brought his whole family from Puerto Rico. Erik’s comment made me smile and showed me that at Misfit you get to really know the speakers and the attendees.

Interesting enough, I think Marc and Valerie where the family that travelled the longest distance from an even smaller island called Guernsey in the Channel Islands.

The day ended and the evening event was at a new place where the launch of Misfit Press and Wolftree Magazine was going to happen.

There is so much to tell about the conference and like AJ mentioned, I honestly can’t recall exactly what happened on each day. I took enough pictures where I can tell a story and see who spoke when.

Poets and Potters and Stories Oh My

There were poets and potters and stories of friends like C.C. Chapman, shared a bit more about life experiences than what would be shared in any other public event. Some of the speakers on the second day had spoken the year before. It was great to hear a follow up to the story they told a year ago at that same location. Many are doing completely different things which made me wonder how much our experience the year before influenced their new paths.

The second day ended with Emmanuel Jal being interviewed by Mark Weiler(owner of the Ecce Gallery) and sharing his story as a Sudanese Child Soldier. Emmanuel’s journey started from the battlefield to being a musician. He told us how his work helps those he left behind and the newer generations that were in his exact shoes, kept the audience entertained. 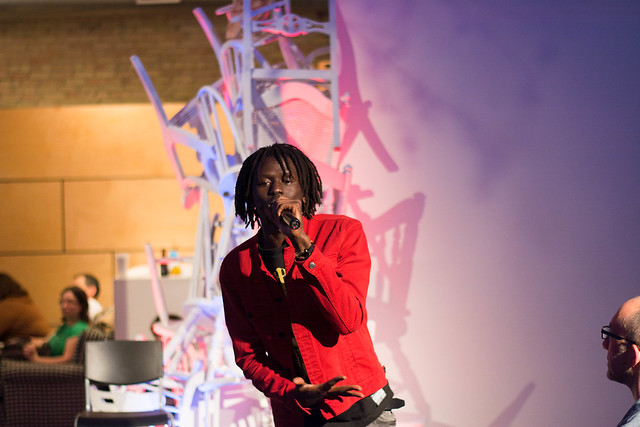 After a pretty interesting story of success, he closed Misfit Con with some dancing and singing which from my Puerto Rican perspective (influenced by my African heritage) is the way to end any event. 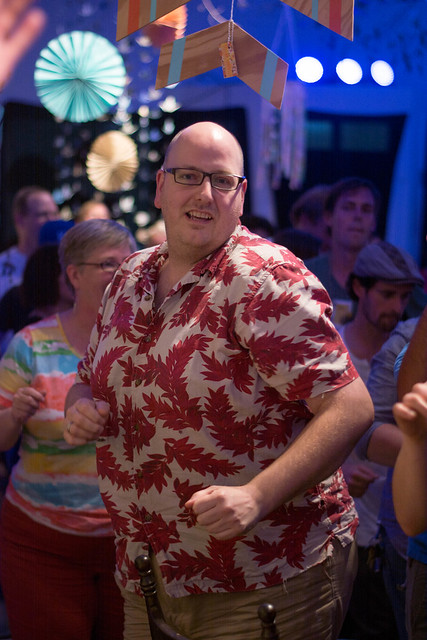 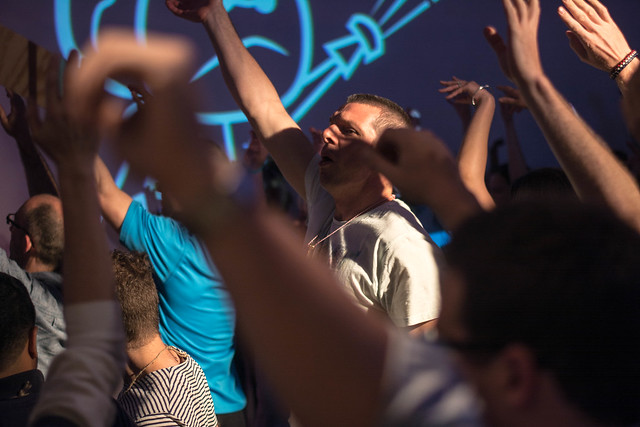 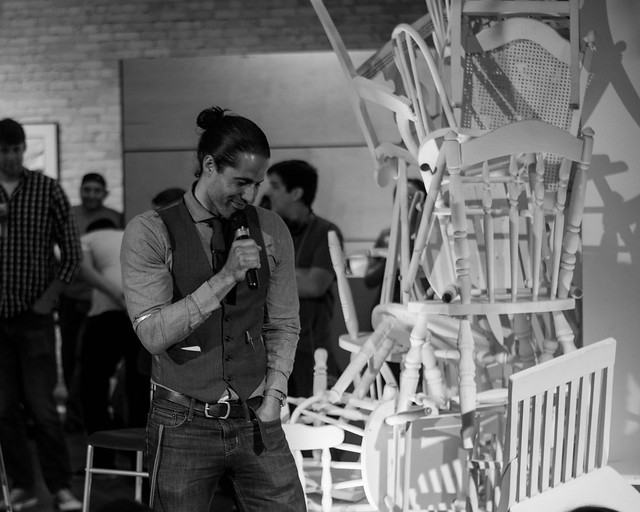 I went over to Ecce and had flashbacks from the previous year. Last year, I had to rush towards the airport to catch a flight after having an amazing time. This year it was no different from; we had performers Kosha Dillz, Laura Aiisha,  Diane Miller, and few others. There was  photo booth setup by my friend, Jesse Hoorelbeke, based on Jesse’s comments, I probably have the record of standing in more photos than anyone else (Because I am such a fan of Jesse’s work, I wanted to be part of it). 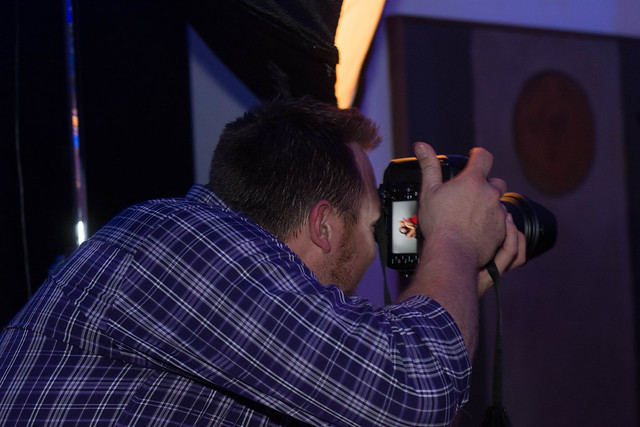 I left the event at around 5 am where I had the chance to chat with Tony (AJ’s brother) and get to know him a bit better since he is usually working at the Misfit events.

I walked towards the hotel and realized I had to start my drive up to Minneapolis and had not gotten any sleep so I made sure I went to bed and slept later than usual.

Overall, it was the most fun Misfit con experience I have had yet.

The Misfits Are Influential In My Life

It took me a while to publish this post because I kept sitting on this and not giving it a priority with the other work I have done since May. Since I am in the middle of donating my time to help fund a Kickstarter project, (Special thanks to fellow Misfit Clay Herbert and his knowledge), I realized how AJ and Melissa have influenced many of the things I am doing and how being at Misfit Con, has helped me and Lucy focus more on doing better quality work.

Have you heard of Misfit Conference? Were you there? Will you attend the next one?

Some of my Favorites Pic’s taken by Jesse Hoorelbeke