Our Aunts & Uncles Are Fighting against the New “Asbestos”

Among Indian communities worldwide, Aunty and Uncle are commonly used to refer to elders even if they are not relatives.  Other cultures around the world respect the elders and value their experience. We need More Respect for Our Elderly For some reason, the US culture uses the elderly for less important things. A  good example… Among Indian communities worldwide, Aunty and Uncle are commonly used to refer to elders even if they are not relatives.  Other cultures around the world respect the elders and value their experience.

We need More Respect for Our Elderly

For some reason, the US culture uses the elderly for less important things. A  good example is when they place a smart older person in front of Wal-Mart to greet people coming in.

I always wonder what life experiences those individuals had prior to greeting folks at the door of a major corporation. I wonder if  their knowledge might be useful to an entrepreneur like me. That is one of the many reasons I have not visited in Wal-Mart in almost five years.

Defending against the Toxic Ashes in Tallaboa

But in this case, I want to talk about brave individuals who stood up to protest in Tallaboa. I feel these Aunts and Uncle are related to me. They are fighting for the well-being of friends and family in Ponce, Peñuelas, and Guayanilla.

Yesterday I wrote how I got a bit more involved with activism in the past year. So I decided to celebrate that anniversary and support an on-going cause in the southern part of the island.

Our Trip to Ponce to Show Some Support

During the day I heard of 21 arrests in Tallaboa, Peñuelas. Protestors were trying to stop the deposit of Toxic Ashes by a major corporation.

A few of us decided to go down to Ponce to show our support for the individuals arrested.

We all hopped in a car and drove approximately 90+ minutes to my hometown of Ponce.

When we arrived in front of the Police Department in Caobos in Ponce, there was a crowd of supporters waiting for the people to be released.

Lots of Love and Sense of Community

I quickly felt the sense of community.

I was greeted, offered a meal and thanked for making the 90-minute trip to show our support.

But in reality, the people we have to thank are those who stood in front of a massive police force. Those who did everything possible to stop the deposit of ashes and those who became victims of Police Brutality.

As I asked around it was evident that most of these individuals who arrested were not young college kids who are trying to call attention.

A much older crowd was Arrested

Most of the folks arrested were over 50+ years old.

Many of them took a stance against this injustice. Their health can't stand the abuse and lives are at stake. The toxic ashes are steps away from their homes.

I know the area very well because my younger brother went to school in the Tallaboa Community. Tallaboa is less than 10 minutes away from where I spent my teenage years.

A Quick Guide to Understand the Environmental issues in Tallaboa Peñuelas 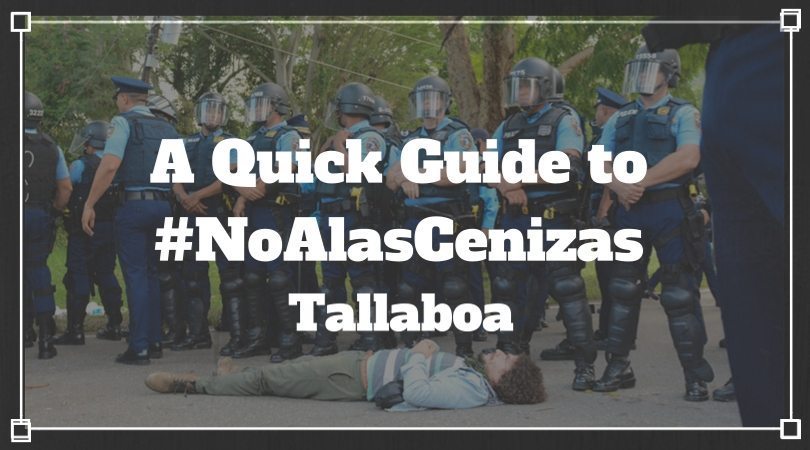 In the 1970's anyone seeking or supporting the model of Puerto Rico being independent was followed around and harassed by Federal Agents and Local Secret Police.

In the past few demonstrations, I have seen how cops are arriving to arrest people without any identification. They are usually the ones coming to use excessive force. Take a look at the cops in the video and try to find their names.

This particular community has always been affected by the poor decisions of the wealthy. If you drive by the area, you can see how they took the coastline and built a refinery. The Coco Refinery was abandoned in the 70's and created one of Puerto Rico's biggest pollution disasters that still exists in 2016.

Even though many were arrested today, the same folks will be out there protesting and trying to stop the ashes of those trucks from affecting the rest of the communities.

Puerto Rico especially Peñuelas, Guayanilla, and Ponce should be putting a stop to this.

For those in Peñuelas, Guayanilla, and Ponce I think many people are brushing off the fact that the wind can carry those ashes for miles. If you live in these towns and you are doing nothing about it, then you are also part of the problem.

Everyone should be out protesting these poor decisions by wealthy corporations to save money and get richer.

Senator Maria de Lourdes was interviewed on a Facebook Live Video, and she called the toxic ashes the New Asbestos.

These toxic ashes will slowly kill and affect the quality of life of many.

So what are you doing to stop this? What support are you providing to those in the front?

Think of the many Uncles, Aunties, Grandpas and Grandmas who were out there protesting. Our Brothers and Sisters that were hurt by the Police. Cops who are defending the interests of the wealthy, not the people. Sadly many of these cops belong to these communities and are hurting their own.

Let's unite and stop this on many fronts.